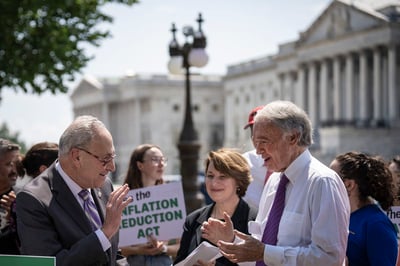 Despite Republican opposition and a marathon debate, the Senate has passed a climate and tax bill- the Inflation Reduction Act. This legislation will make the most significant federal investment in history to counter the toll of climate change, lower the cost of prescription drugs, and revamp portions of the tax code to make it more equitable.

Energy experts say this bill will help the US cut greenhouse gas emissions by approximately 40% below 2005 levels by 2030. Though scientists say that far more is needed to prevent the planet's warming to dangerously high global temperatures, this is a significant first step for Democrats after decades of inaction.

Several climate groups have released statements regarding their thoughts on the legislation:

American Clean Power: “This is the vote heard around the world. It puts America on a path to creating 550,000 new clean energy jobs while reducing economy-wide emissions 40% by 2030. This is a generational opportunity for clean energy after years of uncertainty and delay. This unprecedented investment in clean energy will supercharge America’s clean energy economy and keep the United States within striking distance of our climate goals.”

Natural Resources Defense Council: “The Senate just made climate history. This is the most significant action the U.S. has ever taken to combat climate change. It will benefit the people of all 50 states—their health, their wallets, their homes and their future. And it will help the U.S. deliver on its undeniable responsibility to the rest of the world to do its part to address this global crisis. The House needs to come back quickly to cement this essential climate action. There is no time to waste. This bill is not perfect, but from a climate pollution perspective, the positives heavily outweigh the negatives—by a factor of 10.”

Rocky Mountain Institute: “This is a historic moment for climate and clean energy progress not only in the United States, but globally. This legislation gives the U.S. a real chance to reach its Paris Agreement target— while lowering costs for American households.”

However, some groups have argued that the bill carves out too much for fossil fuel projects. Democrats agreed to several fossil fuel and drilling provisions as concessions to Senator Joe Manchin III (D-WV). Because West Virginia is heavily dependent on coal and gas, Senator Manchin demanded a sweeping overhaul of the environmental review process regarding the governance of how and where fossil fuel infrastructure is built. This provision requires the Department of Interior for ten years to offer at least 60 million acres for offshore drilling every year that it leases land out for offshore wind.

Democrats have been brushing off criticisms about potential trade-offs of the provisions, also called the “devil’s bargain.” Nonprofits, think tanks, and academics offering positive comments on the proposed deal have millions of dollars in grants tied to claiming credit for climate policy, so they will not criticize the devastating impact that offshore drilling has on the environment.

If the carbon cost-benefit analysis model holds true, every additional ton of greenhouse gases generated by the bill’s fossil fuel provisions corresponds to 24 tons of emissions saved. So, the “devil’s compromise” may be better than nothing.

Niyati Hora is an ESG/Impact Analyst at YvesBlue that specializes in biology. She holds a Bachelors Degree in Molecular and Cell Biology from the University of Connecticut. She is experienced in sector analysis and impact data analytics.