The Economist has a special section on ESG this week with much to ponder over.  Anyone who has worked in this space knows the issues, so I will spare you the pain of launching into the issues around AI and bad data, data gaps, opaqueness, and lack of standardization and reporting.

However, one thing that stands out is how current ratings providers rate the impact of environment (and climate change) on firms’ business.  The issue here is that they don’t capture what the firms are doing to the environment. So, to make ESG actionable, these rating providers suggest we should simply focus on ‘emissions,' which is the biggest threat to life on the planet. And in doing so measure less but measure better.

Finally, to recap Cliff Asness from his 2017 article, investing for good by construction will earn lower returns. There are two reasons - by riding your ‘opportunity set’ or universe of stocks to select from (when exercising exclusionary practices), you will at best earn from using a superset, something quants call "constrained optimization."

Second, by selling bad stocks, you lower their price, however, the buyer will pay less but can earn more. (Cliff calls this “being good sucks”). If you really want to make an impact - don’t walk away but buy a bad actor and engage with the management to nudge changes. Think of Engine No. 1 and Exxon. Look at a platform like Yves.Blue on how you can engage and track this type of engagement and forward momentum.

As you know fiber optic cable (FOC) is widely used to transmit information using light - a mechanism that is cheaper and better than copper (which maxes out at 40Gbps compared to the speed of light). One of the key ingredients to manufacture FOC is helium. The price of this element has jumped 135% in the past two years while the price of silicon tetrachloride has risen by 50%. See graph below. 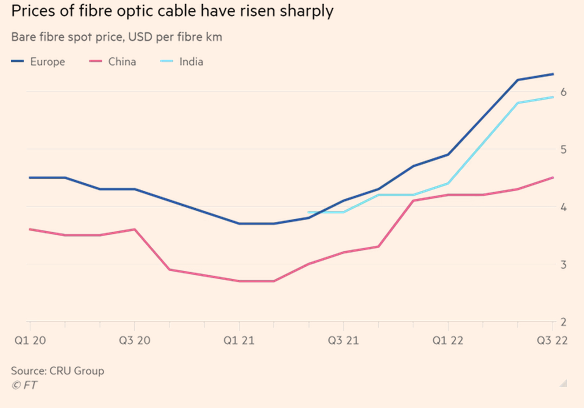 This has led to the price of FOC rising by 70%. “In my professional career I’ve never seen anything like this inflationary crunch,” said Wendell Weeks, CEO of Corning, the biggest producer of the product. The demand from tech giants  such as Google, Amazon, Meta and MSFT, is rising as they expand their data centers. This is also hurting customers in India, China and Europe who are upgrading their digital infrastructure.

As we have said in the past, Ukraine and Russia are suppliers of critical elements such as neon and rare earths that are a must for chip manufacturing and devices/appliances. These shortages could keep prices high until supply is restored.

Private Equity firms generally invest in mature firms with lots of cash generation capacity with the goal of trimming the fat and pushing out inefficiencies. So their interest in biotech startups is an interesting development.

KKR along with OMX Ventures (a VC firm) are investing in a $55 million seed round in Replay. They are not the only ones. EQT, Carlyle and Abingworth have also taken stakes in lie sciences startups or in VCs that invest in that vertical. “We think there is great fundamental life science across the world, especially after Covid. We’d like to use both the financial and human strengths of KKR and invest behind that,” said Kugan Sathiyanadarajah, MD at KKR and a board member at Replay.

As for the $55mm seed round, the CEO (Lachlan MacKinnon) of Replay mused, “It’s definitely a big seed round. Our goal is to build an enduring company that both takes products to market but also remains excellent at biotech technology development.” It is indeed a big round but if you intend to build a platform you will need the cash.

But as we have seen with the Softbank disruption of the VC space with unwise splurges, could PE’s interest in startups be the same? Anyone who has spent time in the VC space will tell you that the parameters one looks at in an early stage are remarkably different from those of mature and public companies.


Finally, for some cheer, watch Yun-chan Lim perform Rachmaninov Concerto #3 at the Cliburn competition. This 18-year old S. Korean is a gift from above. 😀